All the Core's GUI's components are pretty much done. I decided to program the GUI from scratch and have everything be drawn dynamically, so all the graphics are drawn using AS.

The Core GUI's far from finished, but here's a sneak preview of the current system: 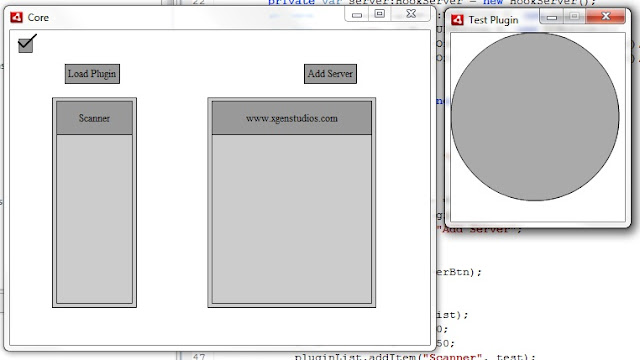 Plugins are SWF's (there'll be a custom file type for them when I get around to it containing important information like which functions to hook, which Core variables it needs access to, title, ect) so are easy and quick to program. Each plugin will run within it's own window and by default will not be able to access other plugins.

Plugins will by default be able to do the following:
Change their window size, change their window title, have their flash code do whatever they want within their window.
Manipulate incoming/outgoing packets
Send packets and simulate receiving  packets

I might add more stuff in the future, but that's how I see it now.

The socket hook it uses will be cross-platform (However, Linux uses an outdated version of AIR, so a Linux version might not happen but I can confirm is possible) and works by hooking individual servers/ports. And since it's AIR and plugins are written in flash, it's 100% cross-platform allowing the Core and all plugins to work on Windows, Mac and Linux (when I get around to it), making it one of the few (if not only?) cross-platform packet analyzer/manipulators. But the hook does have some downsides.

To take a look at the hook objectively:
Pros:
Cross-platform (Windows, Mac, Linux)
Easy to program
Harder for anti-hack/cheat programs to detect as it doesn't involve modifying programs to hook sockets
Not many (if any) anti-hack/cheat programs check for this specific type of hook
No need to piss around with "socket ID's"
Cons:
Still possible to detect
Works per-server instead of per-program, so can pick up unwanted connections from other programs trying to access the hooked server
Also works per-port and any connections to unhooked ports on the hooked server will be dropped/time out.


I'm expecting the first release to come out in about a month from now.